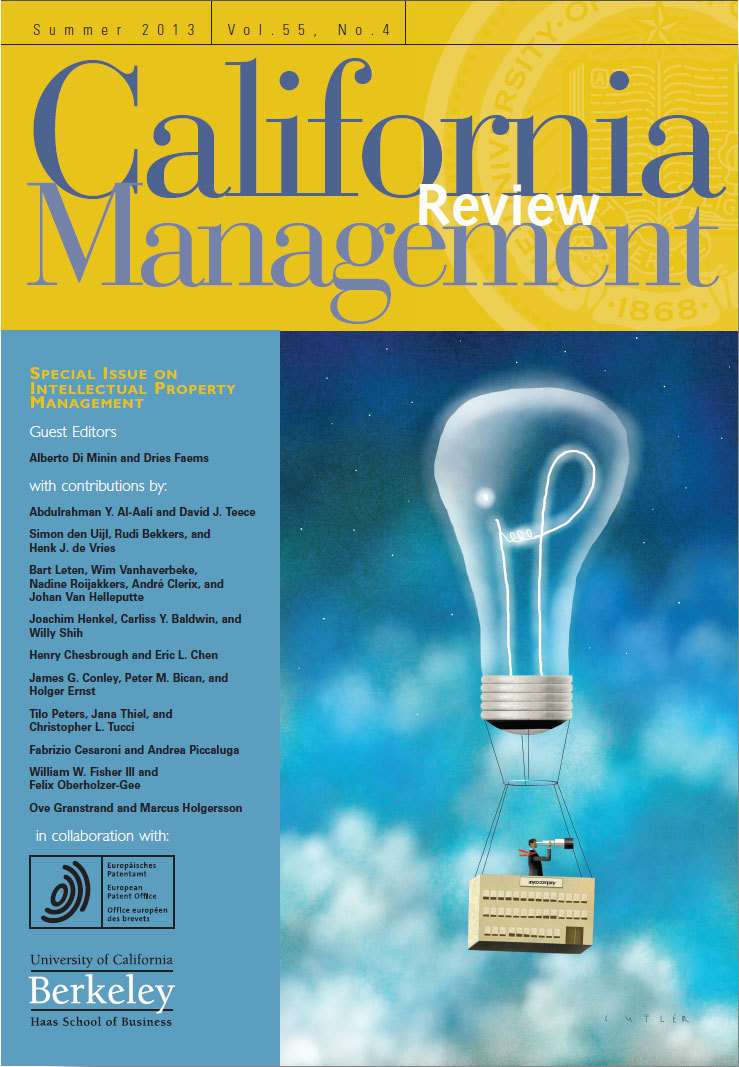 Two top thinkers in the fields of innovation and intellectual property from the Haas School have contributed articles to a new special issue of California Management Review (CMR), the school’s peer-reviewed business journal.

The special summer 2013 issue on intellectual property management was published in collaboration with the European Patent Office.

In one article, Professor David Teece, faculty director of the Haas School's Institute for Business Innovation, stresses the importance of integrating intellectual property (IP) management into corporate strategy and business model design. Teece and co-author Abudulrahman Al-Aali of King Saud University in Saudi Arabia argue that IP is no longer the sole domain of patent attorneys or licensing executives but must be the concern of all company executives as well as research and development.

Using Pilkington Group Ltd. of the U.K. as a case example, Teece and Al-Aali outline how the company gradually and successfully introduced its innovative float glass manufacturing process around the world. Pilkington, which makes glass for buildings and vehicles, used a combination of both patents and trade secrets to protect the process as it granted float glass production licenses to existing old-school plate glass companies.

In another CMR piece, Adjunct Professor Henry Chesbrough, PhD 97, faculty director of the Garwood Center for Corporate Innovation, who coined the term 'open innovation,' turns his attention to pharmaceutical drug development and how greater numbers of abandoned compounds could be recovered by licensing unused internal IP.

Chesbrough and co-author Eric L. Chen, senior manager of corporate development and strategy at Onyx Pharmaceuticals, note how as much as 90 percent of spending on pharmaceutical drug development goes toward compounds that are abandoned before getting to market. Rather than letting these compounds sit abandoned on the shelves of R&D labs, they argue pharmaceutical companies and society as a whole would benefit from more creative approaches to managing pharmaceutical intellectual property.

Chesbrough and Chen offer, as an example, the antibiotic Cubicin, which is used to treat serious skin infections. That drug may have never been brought to market had not Cubist Pharmaceuticals convinced Eli Lilly to license the underlying IP, along with the commercialization and development rights, of a compound that Eli Lilly had abandoned. That decision has resulted in more than $333 million in royalties for Eli Lilly thus far.

The guest editors of the special issue of CMR were Alberto DiMinin, assistant professor of the Management of the Scuola Superiore Sant'Anna and a research fellow with the Berkeley Roundtable on the International Economy, and Dries Faems, professor of innovation and organization at the University of Groningen.